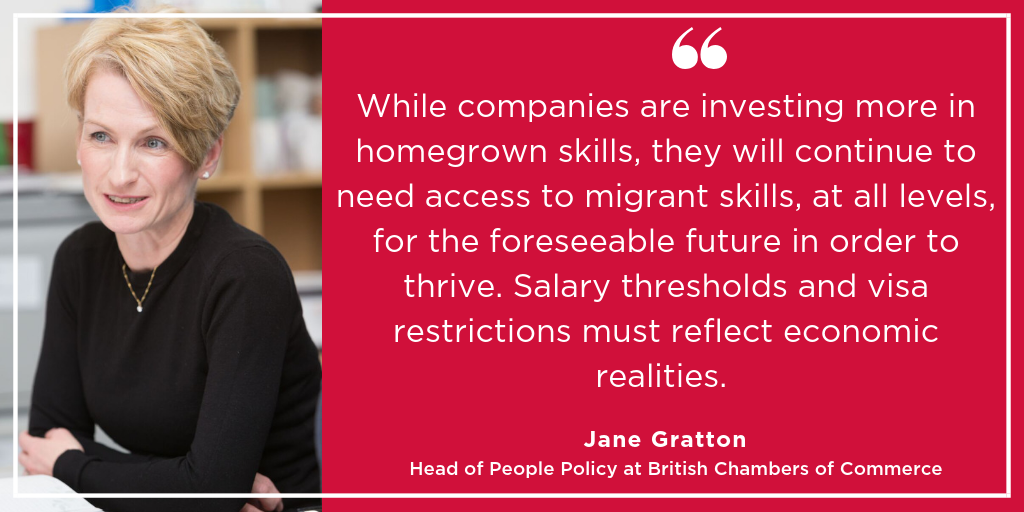 The government's proposal for the UK's future immigration system could have negative impacts for some businesses.

Over half of UK businesses with staff from outside the UK would be negatively impacted by government proposals for the UK’s future immigration system, according to new research released today (Tuesday) by the British Chambers of Commerce and global job site Indeed.

According to a survey of 380 businesses that currently employ non-UK nationals, 53% report they would be negatively impacted by proposals requiring all skilled migrant workers to earn a minimum annual salary of £30k once the UK leaves the EU.

57% of employers say they would be adversely affected by plans to impose a 12-month work and residency limit on lower skilled migrants, requiring workers to leave the UK for at least a year once their visa had expired.

Over a third of firms (34%) would be negatively impacted by an extension of the Immigration Skills Charge to EU nationals. The charge is currently paid by businesses for each migrant worker they recruit from outside the EU, adding to the upfront costs of employment.

Businesses also report a need for access to foreign language skills. 23% of respondents say German and Mandarin Chinese will be important to their business in the next five years, and 20% say French and Spanish will be – highlighting both the importance of ensuring native speakers are available and improving language skills in the UK workforce.

At a time of record low unemployment, when businesses are reporting critical levels of recruitment difficulties, the proposals in the Immigration White Paper would add to the cost and barriers employers face in accessing the skills they need. The leading business group is calling for proposals that ensure firms in all regions and sectors can continue to access skills at every level, when they are unable to recruit locally.

The ending of free movement will present significant costs and challenges for employers. The new Prime Minister must take a fresh look at the immigration restrictions and charges to ensure firms can access the workers they need without undue bureaucracy and costs.

Jane Gratton, Head of People Policy at the British Chambers of Commerce (BCC), said: “When businesses are unable to recruit skills and labour at a local or national level, the UK’s new immigration system must allow them to access non-UK workers quickly and cost effectively. The survey results reflect the extent of business concerns about future restrictions, charges and thresholds, as these will exacerbate recruitment costs and barriers.

“While companies are investing more in homegrown skills, they will continue to need access to migrant skills, at all levels, for the foreseeable future in order to thrive. Salary thresholds and visa restrictions must reflect economic realities. It’s vital that the Migration Advisory Committee’s review into the salary threshold takes into account the needs of different sectors and regions.

“Business communities will be calling on the next Prime Minister to ensure the UK’s future immigration policy has the right balance of flexibility and controls to alleviate their concerns.”

Pawel Adrjan, UK economist at the global job site Indeed, said: “Record high employment and declining interest of European jobseekers in British jobs mean businesses in many sectors are finding it increasingly difficult to hire workers with the right skills. Like in any open economy, migration flows are one way to release that pressure valve but as our survey found, new proposals do not appear to flex and breathe depending on employers’ needs. Nowhere in the UK labour market is this need for suppleness more pertinent than in healthcare and construction, which have a high dependency of non-UK workers.

“Communication at work remains essential and language skills in particular have become vital in a connected world in which more businesses than ever operate across borders. While research suggests fewer UK students are learning foreign languages, our data reveals the importance of learning new spoken skills. German recently overtook French as the most sought-after language by UK employers but demand for Chinese languages has rocketed over the past year as businesses consider future trading relations.”