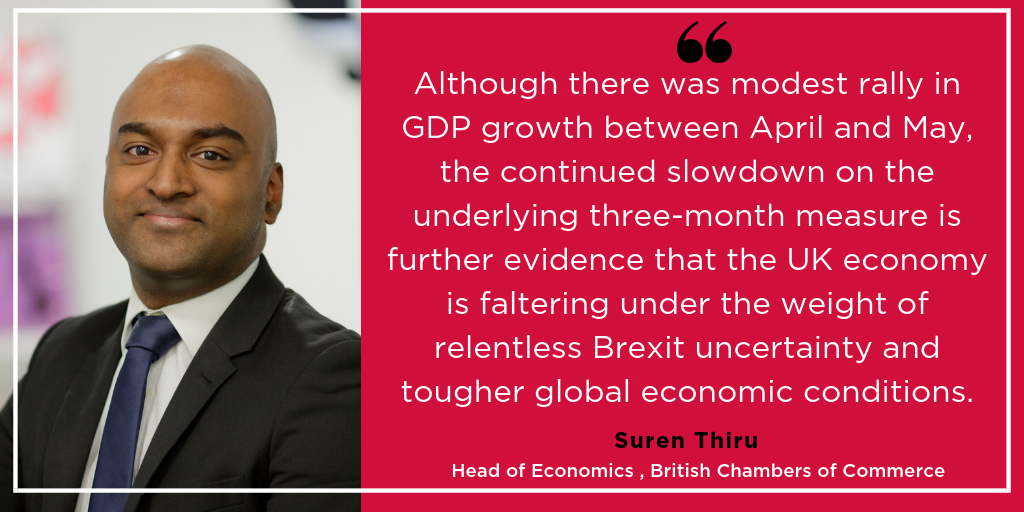 Head of Economics at BCC comments on the latest UK GDP and trade statistics.

Commenting on the latest UK GDP and trade statistics, published today by the ONS, Suren Thiru, Head of Economics at the British Chambers of Commerce (BCC), said:

“Although there was modest rally in GDP growth between April and May, the continued slowdown on the underlying three-month measure is further evidence that the UK economy is faltering under the weight of relentless Brexit uncertainty and tougher global economic conditions.

“Manufacturing activity picked-up in May as car production reopened, but the longer-term measures point to a sector under pressure from the running down of excess stock, tougher global trading conditions and rising upfront costs.

“There was a welcome narrowing in the UK’s trade deficit in May, largely reflecting both a decline in imports and a rise in export goods. However, Brexit uncertainty, the absence of clarity on fundamentals aspects of trade conditions after October 31st, and a slowing global economy are likely to increasingly weigh on the UK’s net trade position over the medium-term.

“Against this backdrop, it is vital that the next Prime Minister prioritises avoiding a messy and disorderly exit from the EU, as such a departure would likely trigger a marked deterioration in economic conditions. More must also be done to boost the UK’s growth trajectory by delivering the transformative infrastructure projects needed to secure the UK’s economic future.”