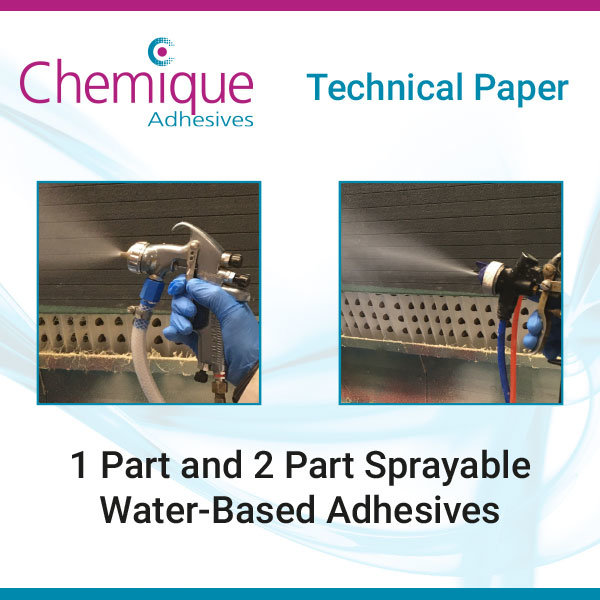 What is a water-based adhesive?
A water-based adhesive is an adhesive where the active component is held in water and can either be as a colloid, solution, suspension or dissolved. Once the water is removed from the system, only the adhesive remains. Water-based adhesives can be applied to various substrates and when the water is lost through evaporation or absorption, the adhesive properties cause the substrates to adhere together. The adhesive itself can be made from many different technologies including starch, proteins, resins, latex, various polymers, or mixtures of any of these. In this paper we are most concerned with latex polymer adhesives. 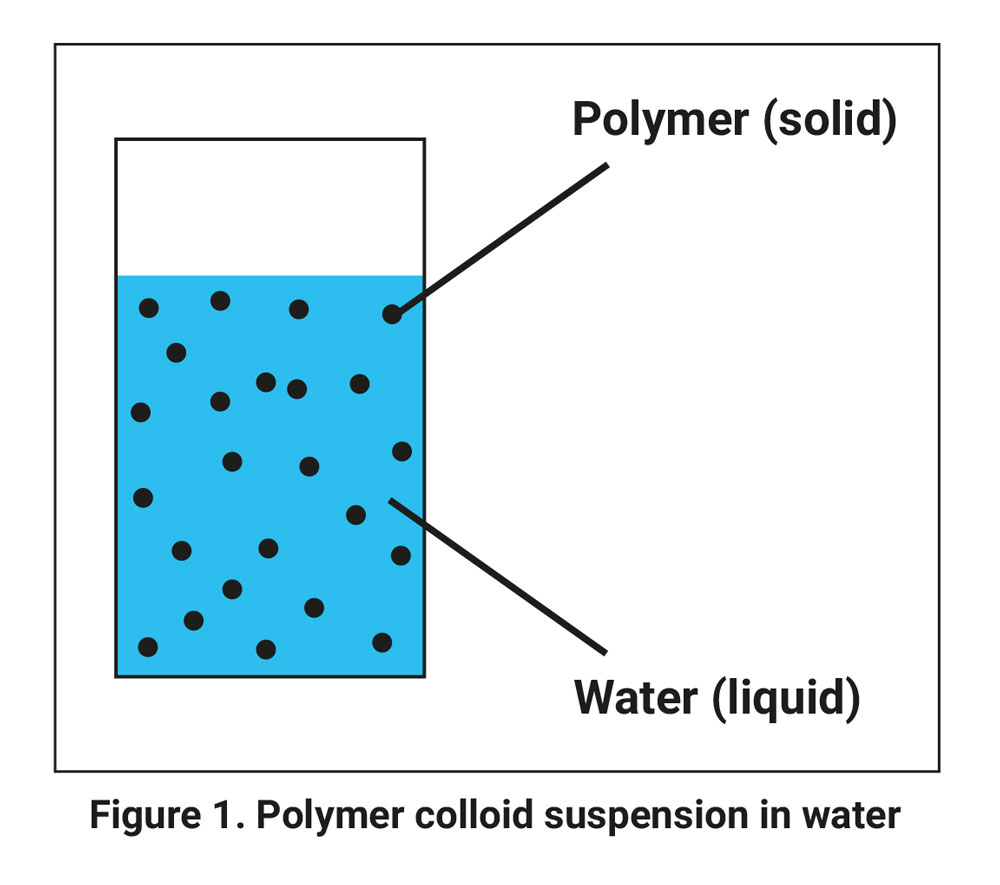 Many adhesives are polymer based. The polymers in water-based adhesives are latexes, which are colloid suspensions. This is where the solid polymer is phase separated from the liquid water and the solid particles are suspended throughout the water (See figure 1). The size of the polymer particles are small and measured in nanometres, and usually make up approximately 50% by weight of the total mixture, although this can be higher, particularly once formulated with other additives. 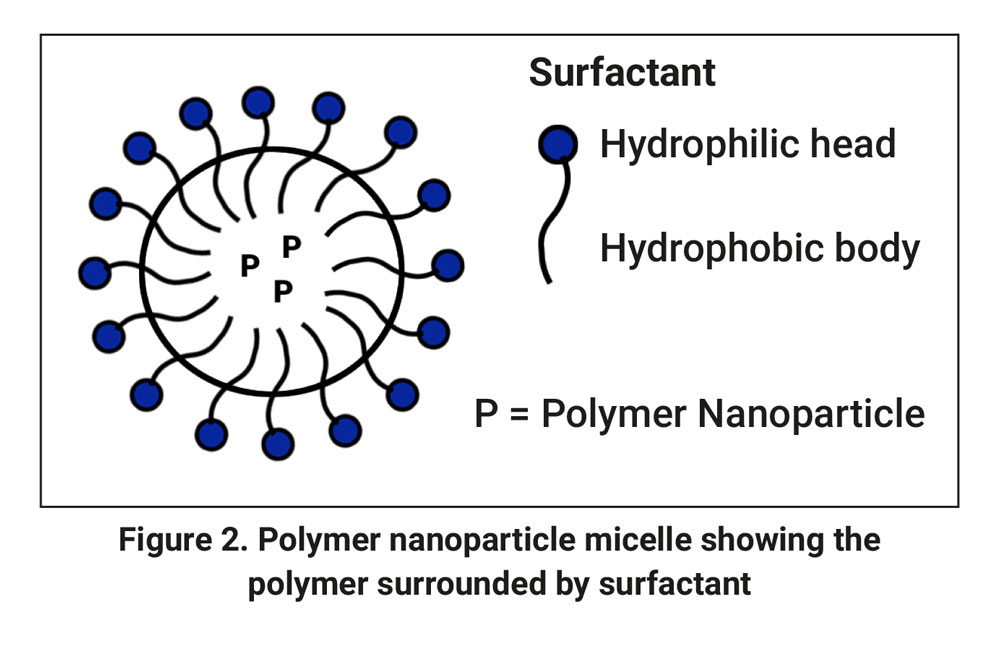 How do sprayed water-based adhesives work?
All water-based adhesives adhere due to the removal of water which leaves the adhesive behind. The removal of the water can be through evaporation or absorption into the substrate, or a mixture of the two. With sprayable latex adhesives this process is accelerated by breaking the colloid down and forcing some of the adhesive out of the water. The adhesive particles then coagulate but do so at a microscopic level causing a fine spray of tacky adhesive particles to be separated from the water.

When the product hits the substrate, as some of the adhesive has separated from the water, it means that instant tack can be achieved but full-strength will not be obtained until all of the water has disappeared and the adhesive can work (usually about 24 hours). If the adhesive was sprayed without breaking down the colloid there would be no instant tack, as none of the adhesive particles would be present to give tack. If too much of the adhesive is forced out of the water, then the bond will be too wet and this will cause large adhesive particles to be separate from the water and this excessive water could produce adhesion concerns and issues with getting a uniform coating of adhesive. With sprayed water-based adhesives it is vital to break down the correct level of colloid and so the adhesive should be correctly formulated to achieve this balance.

Most sprayed water-based adhesives are designed for a two-way stick, i.e. both substrate faces are sprayed. This allows for a small amount of adhesive to be sprayed onto each face as the adhesive can easily bond to itself on the other substrate face.

2-part water-based adhesives
There are several ways the colloid can be broken down and the easiest method is that of a 2-part system when a second component, often called the activator or part B, is used which forces the polymer out of the water. The formulated colloid which includes the adhesive is known as part A. The activator usually works by preventing the surfactant around the polymer micelle from working causing the micelle to break down and freeing the polymer which will then coagulate with other freed polymer particles. The activator is sprayed directly into the atomised spray of the part A during application (See figures 3 and 4).

The activator is added at a ratio usually between 5:1 and 10:1 (Part A : Part B) by weight. Achieving the correct ratio is important to ensure that the colloid breaks down as required. When the micelles break down, the polymer nanoparticles coagulate together and separate from the water.

When spraying with a 2-part water-based adhesive the level of activator and what activator is used can be controlled which allows for how well the colloid breaks down. This is particularly useful when working with substrates that are difficult to bond as being able to control the amount of adhesive colloid and activator provides the best opportunity for good adhesion.

It also means that 2-part water-based adhesives have a good level of initial tack. However, if there is a change in the ratio, through either a fault in application of the activator or the part A, then the adhesion and tack level will reduce. Additionally, to ensure that both parts are applied at the correct ratio, as well as a spray gun, specialist equipment may be required, such as a pump system. This controllability of application does mean that if the viscosity of the adhesive changes (i.e. through temperature changes) then the amount of adhesive and ratios can be easily altered to ensure the best application possible.

It is the shear forces through spraying of the adhesive that cause the breakdown of the colloid and this can be controlled by changing the amount of atomising air and amount of adhesive. However, these will only make minimal differences, as some substrates that are difficult to bond to may not be able to be made to adhere. The level of initial tack will also be lower than that of a 2-part water-based adhesive, as shear forces will not be able to break down the colloid as well as the chemical method used in 2-part adhesives.

However, specialist equipment is not required when using a 1-part adhesive. They can be applied using a pressure pot and spray gun or even more simply by having the adhesive gravity fed, which requires the vessel that holds the adhesive to be at least 1.5 metres above where it is being applied. This does mean that the amount of adhesive applied can only be controlled up to a certain level, and changes in viscosity (i.e. through temperature change) may mean that the adhesive is more difficult to apply. As well as this, it also means that the adhesive cannot be pumped as the colloid will break down and block the pump.

Conclusions
Both 1-part and 2-part sprayable water-based adhesives can be easily applied. The 1-part adhesive requires very little equipment, aside from the spray gun and the adhesive can be gravity fed, however the 2-part adhesive requires a method of ensuring that the two separate components are applied at the correct ratio and this means ideally using a pump system. Furthermore, 2-part sprayable water-based adhesives generally adhere to more substrates, provide stronger bonds and have a higher initial tack.