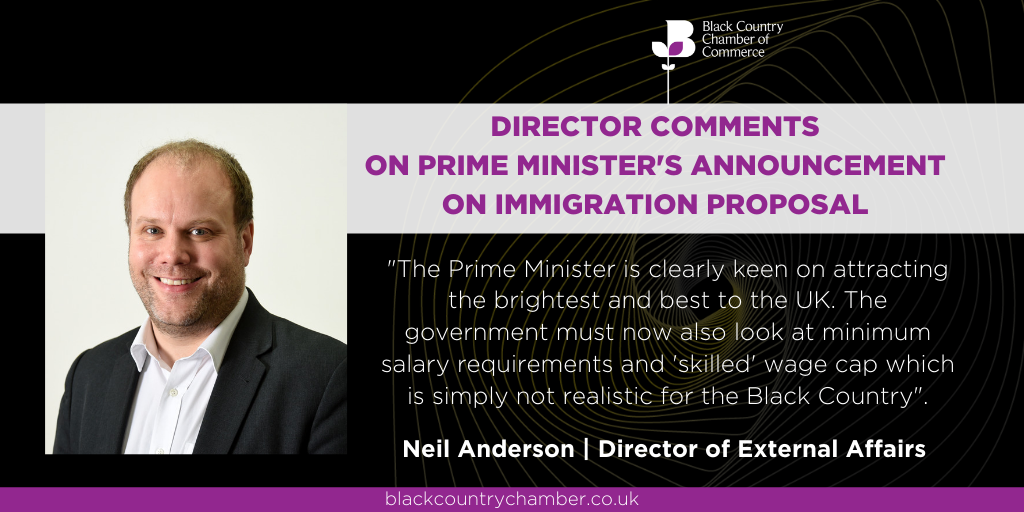 “The Prime Minister is clearly keen on attracting the brightest and best to the UK, ensuring that our businesses can continue to employ the best candidates from around the world.

“What the government must now also do is look at the minimum salary requirements and the £30,000 ‘skilled’ wage cap which is simply not realistic for areas such as the Black Country.

“The West Midlands manufacturing workforce is made up of 14% EU/EEA workers, so government must continue to recognise their full and active role in the region.

“It is not just in manufacturing though, EU-born workers are employed at all levels, across many sectors. From speaking to our members, there is still a lack of understand about the Home Office’s Settlement Scheme and what EU/EEA-born workers must do next.”

Commenting on the Prime Minister’s announcement on immigration proposals, Dr Adam Marshall of the British Chambers of Commerce said:

“This is a positive signal on immigration, as business needs the new government to demonstrate openness to the world.

“It should be followed, swiftly, with further concrete policies to ensure our future immigration system works at every level, and in every part of the UK. At a time when business communities are reporting critical recruitment difficulties, access to skills at all levels is still needed by businesses facing shortages in many areas.

“Clarity on the long-term immigration rules after the UK leaves the EU can’t come soon enough for business.”