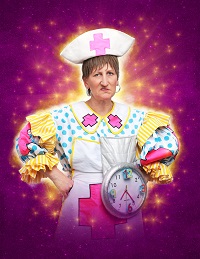 Back by overwhelming popular demand, Doreen Tipton won Best Pantomime Newcomer at the 2017 Great British Panto Awards for her role in Aladdin. On her role in Jack And The Beanstalk she said "I ay won it this year, but fair's fair, yo' cor' keep winning the Best Newcomer Award year after year." Ian Adams is currently nominated for Best Pantomime Dame In The Midlands for his role in Jack And The Beanstalk at the What's On Readers' Awards.

Vicky Price, Associate Director - Development and Communications at the Grand Theatre said; "We are absolutely delighted to welcome back Doreen and Ian Adams who are proving to be Grand Theatre pantomime favourites year after year. Advance sales for Sleeping Beauty are at a record high and we look forward to announcing the rest of our star-studded cast very soon."

Once upon a time in a land far away, the beautiful Princess Beauty is given a birthday present by her evil godmother Carabosse"¦ by pricking her finger on an enchanted spinning wheel she is placed under a cruel curse and forced to sleep for 100 years. Can true love survive and the handsome Prince break the spell? Can the Princess' friends help save her? Who will outwit the evil Carabosse and foil her wicked plans and will Doreen cope with having a job?

With a star cast line up still to be announced, Wolverhampton Grand Theatre's 2018/19 pantomime Sleeping Beauty is guaranteed to have all the fun, laughter, magic and special effects that you've come to expect from a Grand Theatre pantomime with Qdos Entertainment, the world's biggest pantomime producer.

The local partner for Sleeping Beauty is Dudley Zoological Gardens.

Tickets for Sleeping Beauty are now on sale. Tickets can be booked in person at the theatre, by calling 01902 429212 or online at www.grandtheatre.co.uk.