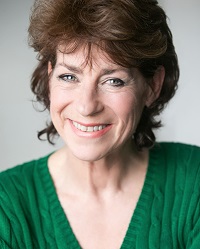 Wolverhampton Grand Theatre have announced that Deena Payne is the first of an exciting cast line up to be announced for the in-house production of Amanda Whittington's Ladies' Day from Friday 13th - Saturday 28th July 2018.

Deena Payne will play Pearl in Ladies' Day. She is best known for playing Viv Hope in Emmerdale, a role she played for 18 years, making her one of the longest serving female cast members in the shows history.

Deena originally trained at Arts Educational, and her career started in 1968 as a dancer performing in many TV shows.  She appeared in the original West End cast of They're Playing Our Song by Neil Simon. Stage musicals include: Noel Pearson's The King, Big Sin City for Bill Kenwright Ltd, Leiber & Stoller's Only In America at The Roundhouse directed by Ned Sherrin, Beehive for Northern Stage, One Careful Owner for Bill Kenwright Ltd, and Who's A Lucky Boy at The Royal Exchange.

Deena appeared in three tours of the acclaimed play Calendar Girls, produced by David Pugh and in 2017, Deena enjoyed a very successful UK tour playing Kath in the award-winning musical Our House.

Her other television credits include: The Bill and Tales Of Sherwood Forest for ITV, and Crime Stories as Irene. She also appeared in the films Valentino directed by Ken Russell and The Music Machine directed by Ian Sharp.

Deena is thrilled to be appearing at Wolverhampton Grand in Ladies' Day.

Producer and Programme Manager at the Grand Theatre Tim Colegate said; "We are delighted to have somebody of Deena's talent in the role of Pearl in Ladies' Day and I'm sure our audiences will love her too. Deena is a wonderful actress and will undoubtedly add something special to our second in-house production".

Ladies' Day is an exuberant comedy about four likely lasses who work at a fish factory on a day trip to the races. Work, love and life are just one long, hard, slog for local fish-filleting foursome Pearl, Jan, Shelley and Linda. Will their fortunes change when they head to Ladies' Day at Wolverhampton Racecourse?

Racing began in Wolverhampton in 1825 and moved to the current racecourse site in 1888, the first race meeting being held on 13 August. In 1994, HRH Queen Elizabeth II re-opened the new Wolverhampton Racecourse as it stands today.

Ladies' Day is written by Amanda Whittington who is one of the most widely performed playwrights in the UK. Her plays include Be My Baby (Soho Theatre, 1998), Satin 'n' Steel (Nottingham Playhouse, 2005), Ladies' Day (Hull Truck, 2005) and its sequel Ladies Down Under (Hull Truck, 2007), The Thrill of Love (New Vic Theatre, Newcastle-under-Lyme, 2013), Kiss Me Quickstep (New Vic Theatre, 2016) and Mighty Atoms (Hull Truck, 2017). She has adapted Saturday Night and Sunday Morning, My Judy Garland Life and Tipping the Velvet for the stage. She writes regularly for BBC Radio 4, contributing to the Woman's Hour serial and Afternoon Play slots.

Ladies' Day is directed by Alasdair Harvey. Further cast and Creative Team for Ladies' Day will be announced soon.

Tickets for Ladies' Day are now on sale at the Grand Theatre Box Office in person, by calling 01902 429212 or online at www.grandtheatre.co.uk.