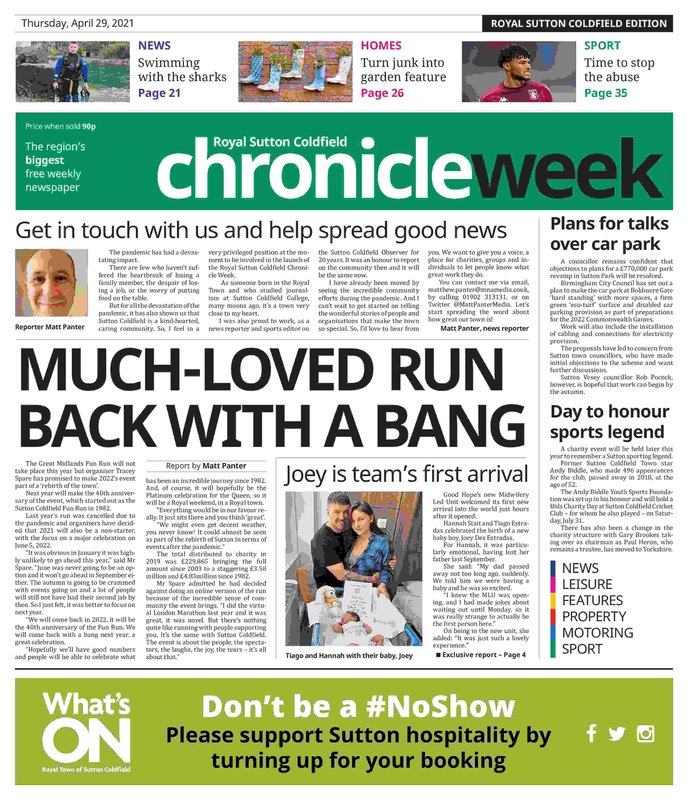 MNA Media’s latest investment in its newspaper portfolio has seen the launch of a new weekly paper for Sutton Coldfield.

MNA Media’s latest investment in its newspaper portfolio has seen the launch of a new weekly paper for Sutton Coldfield.

The new Chronicle Week newspaper is being distributed to more than 24,000 homes across the town following its launch last week. Heading up the reporting team is Matt Panter, who had previously worked on the Sutton Coldfield Observer and the Tamworth Herald. Born and brought up in the Sutton Coldfield area, Matt said he is passionate about bringing news back to the town.

“There are some fantastic organisations and charities in Sutton Coldfield - it’s great to be reporting on them again,” said Matt, who studied journalism at Sutton Coldfield College. “Lots of people in the town were devastated when the Observer closed, and so the response we had last week after the launch was just fantastic.

“We’ve had a lot of positive comments and the MNA has been praised for making such a positive move in the current climate. A local paper was really needed in Sutton Coldfield, which may be part of Birmingham but still has its own identity and a separate town council. After the last year we all know how important it is for people to be kept up to date on their local news, and I’m excited to be bringing that back to Sutton Coldfield.”

Each week the Royal Sutton Coldfield Chronicle Week will be packed with local news and sport, features and puzzles along with film and TV reviews. Editor-in-chief Martin Wright said they were pleased with the response to last week’s launch. “Royal Sutton Coldfield is a jewel in Birmingham’s crown and we are thrilled to be bringing local news back to this vibrant town,” said Martin. “Our reporters have already been contacted by various groups and businesses across Sutton Coldfield, that are keen to feature in this fantastic new paper and let us know everything that is going on. Every week this we will be covering important issues, and will get to the heart of the stories that matter most to our readers.”

MNA Media is Britain’s largest independent regional publisher and the home of the Express & Star newspaper. The Sutton Coldfield paper will be part of the current Chronicle Week series, which already distributes 110,000 papers to homes across Staffordshire and the Black Country every week.

To get in touch with the Royal Sutton Coldfield Chronicle email matthew.panter@mnamedia.co.uk