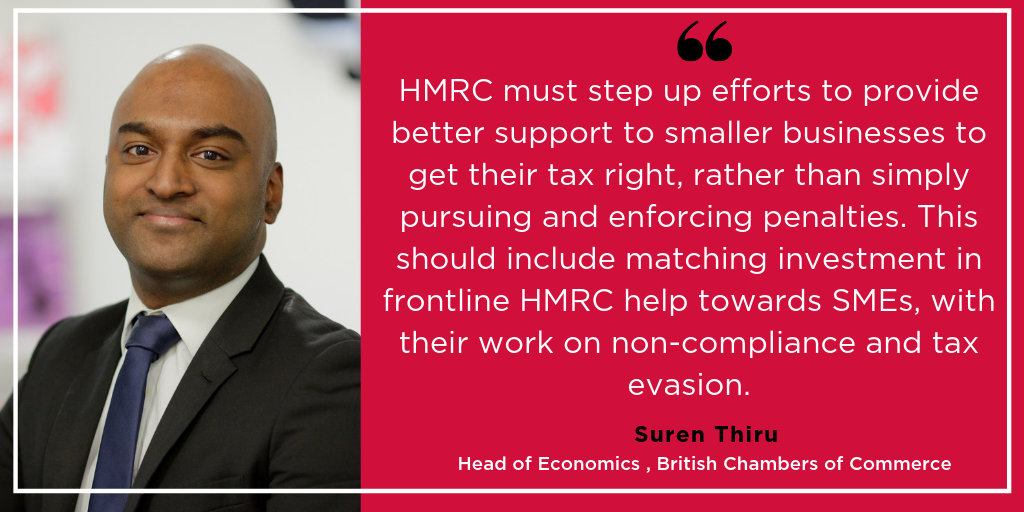 What are businesses perception of the UK tax system and how does HMRC offer support around compliance?

Business believes that the UK tax system is fundamentally unfair and want more support to stay compliant, according to new research released on Tuesday 23rd April 2019 by the British Chambers of Commerce.

Our survey of over 1,000 firms from across the UK, found that nearly three-fifths (58%) of respondents think that the UK tax regime is unfair to businesses like theirs.

The findings largely signal concerns over how HMRC applies the tax rules to different types of firms.

Two-thirds (67%) of respondents don’t believe that HMRC applies tax rules fairly across all sizes of business. Micro firms are more likely to have that view (70%) compared to their medium and large counterparts (59%).

64% of companies disagree that HMRC applies tax rules fairly regardless of where the company is domiciled. Again, there is a difference in perception among small and larger firms (67% micro firms v 59% medium and large).

The results also found concerns over the quality of service provided by HMRC. One in two (49%) firms don’t believe HMRC provides the support they need to be compliant. This figure is higher for micro firms (51%), compared to medium and larger firms (42%). Many respondents expressed frustration that HMRC underestimated the time and money their small businesses spent trying to keep pace with regulatory burdens and the complexities of the system.

Reflecting a strong impression of unfairness in the UK tax system, the leading business group is calling on the government to improve HMRC’s service to business, by matching the level of investment in tax avoidance work with funding for support and advice to businesses. Reducing the burden of compliance and improving processes for collecting tax would also go a long way to improve the process for business.

The relentless rise in upfront business taxes and costs, from sky-high business rates, to the costly introduction of Making Tax Digital and changes to auto-enrolment, is adding to the already onerous cost and administrative burden on firms and is reinforcing the concerns over the current tax regime. The BCC also reiterates its call for the government to pledge to introduce no new input taxes and other significant costs on businesses for the remainder of this parliament.

Suren Thiru, Head of Economics at the British Chambers of Commerce (BCC), said:

“These results reflect a strong impression among businesses that the current UK tax regime isn’t a level playing field.

“When it comes to compliance there is a tendency for HMRC to see smaller businesses as low hanging fruit and as a consequence they feel under the constant threat of being called out for getting things wrong in a tax system that has grown ever more complex. In contrast, action to tackle persistent compliance issues among a small minority of firms remains frustratingly slow.

“There is also widespread disappointment over the escalating burden of up-front taxes and costs of doing business in the UK, particularly at this time of heightened uncertainty. This has proved to be tipping point for many smaller firms who typically operate on a tight cashflow.

“HMRC must step up efforts to provide better support to smaller businesses to get their tax right, rather than simply pursuing and enforcing penalties. This should include matching investment in frontline HMRC help towards SMEs, with their work on non-compliance and tax evasion. More also needs to be done to address the escalating burden of upfront costs and taxes to provide firms with much-needed headroom to get on and invest, train their staff, and compete on the global stage.”