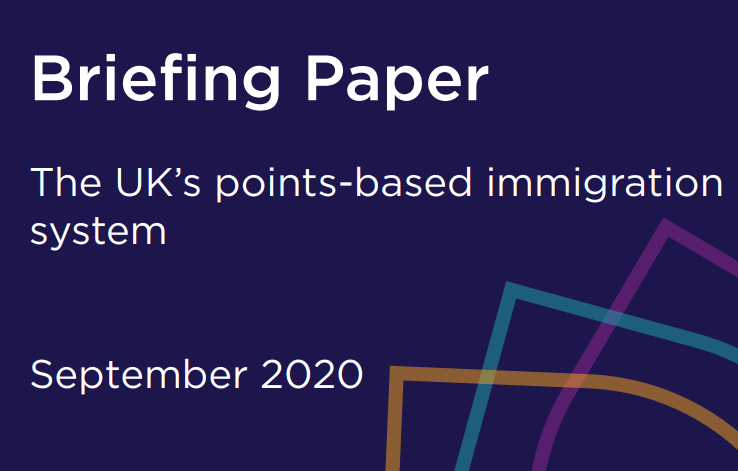 On the 19th February 2020, the UK government set out their plans for the UK’s new immigration system which is scheduled to come into effect on the 1st January 2021. Find out more in this blog.

What is the UK points-based immigration system?

On the 19th February 2020, the UK government set out their plans for the UK’s new immigration system which is scheduled to come into effect on the 1st January 2021.

Following the UK’s exit from the European Union on the 31st January 2020, the government intends to bring forward a new immigration bill for the purpose of introducing a new post Brexit ‘points based’ immigration system. Under the new system, the government plans to end freedom of movement from the EU after the transition period ends and implement an immigration policy which treats EU citizens and Non-EU citizens equally.

The government’s proposals involve points being assigned for specific skills, qualifications, salaries or professions. A skilled worker visa will only be granted to foreign nationals who reach the minimum points threshold which is set at 70 points. They will need to prove that they meet the required level of English proficiency and have a job offer from an approved sponsor at the required skill level. If the applicant meets these (mandatory) requirements they will earn 50 of the 70 points they need.

The new system will prioritise highly skilled workers including scientists, engineers, academics and sets a general salary threshold of £25,600 following the recommendations put forward by the Migration Advisory Committee (MAC). The government’s policy document also states that ‘migrants will still need to meet the higher of the specific salary threshold for their occupation, known as the going rate’. The minimum salary threshold will apply across the UK as a whole with no plans to introduce different regional salary thresholds. There will be different minimum salary rules for new entrants to the labour market which is to be set at 30% lower than the rate for experienced workers in all occupations.

However, there are certain exemptions for individuals who do not meet the stipulated minimum salary threshold but earn between £20,480 and £25,600. For example, if an applicant has a PHD relevant to the job or a job offer in a specific shortage occupation then they can effectively ‘trade’ these characteristics against the minimum salary threshold to get the remaining 20 points they require. These points (salary, relevant PHD, job in a shortage occupation) are tradeable unlike the criteria outlined above which must be met to get the initial 50 points.

The government is also in the process of developing a broader sponsored route within the new immigration system which will enable a small number of highly skilled migrants to work in the UK without receiving a job offer. This is still in the early stages of development with the government intending to consult on the proposals over the coming year.

There will be no temporary or general visa routes available to low skilled workers as the government aims to reduce the overall levels of migration into the UK. The government also has no plans to open up a designated route for the self-employed.

A new graduate route will also open from the summer of 2021 which will enable international students studying in the UK to look for work after they graduate. Undergraduates and master’s degree students will be able to stay in the UK to work for up to 2 years whilst PhD students will be given three years. This will be an unsponsored route.

EU nationals that arrive in the UK before the 1st January 2021 will be eligible to apply for either settled or pre-settled status through the EU Settlement Scheme. Once their application has been approved, they’ll be able to continue living and working in the UK after the transition period ends. The deadline to apply is the 30th June 2021. Click here for further information.

How will the changes to the UK immigration system affect my business?

From the 1st January 2021, freedom of movement will end and EU citizens will no longer be automatically entitled to live, work and study in the UK. This will result in a number of changes that UK businesses need to be aware of when recruiting EU nationals after this date. There will no longer be a two-tier immigration system for EU citizens and Non-EU citizens. EU citizens (based outside the UK after the transition period ends) will be subject to same criteria (outlined above) as Non-EU citizens and will need to obtain a visa to work in the UK which they do not need under the current system.

UK employers will need to sponsor EU nationals and this will require clearance from the Home Office. If your organisation wishes to employ skilled migrants from the EU in early 2021 then the government recommends you obtain approval from the Home Office as soon as possible. UK businesses will also be required to pay the Immigration Skills Charge when employing EU nationals which is to be paid on the same basis as now.

The government has said that the current cap which limits the number of foreign nationals who can apply via the skilled worker route will be suspended and UK businesses will no longer be required to complete the resident labour market test when employing skilled workers. Jobs subject to the resident labour market test oblige businesses to advertise the job they want to recruit for to domestic workers before they recruit a migrant.

The skills threshold for foreign nationals has also been lowered in line with the Regulated Qualifications Framework from RQF level 6 to RQF level 3. In practice this means that any individual seeking to move to the UK to work will now need the job offered to be at the skills level of A-level or equivalent whereas under the current system they require a job at degree-level.

It is important that employers are also aware of the government’s plans to introduce a new singular approach to criminality across the immigration system from the end of the transition period. EU citizens are currently subject to different criminality thresholds from Non-EU citizens within the existing rules. The new rules will be applied to everyone regardless of where they are from.

Click here for more information on the government’s proposals for the UK Points-Based Immigration System.

What are the Chambers of Commerce’s views on the UK points-based immigration system?

While we welcome the ambition to attract the best and brightest from across the world, businesses need access to the right people at all levels where they face skills shortages locally. The results from our Quarterly Business Report Survey have consistently shown that there are ingrained skills problems within the regional economy with the latest results revealing that over half of the firms who attempted to recruit experienced recruitment difficulties. When you consider the existing shortages combined with the MAC’s own analysis that 70% of resident EEA citizens arriving in the UK since 2004 would be ineligible for a skilled worker visa; it is clear that the new proposals could potentially exacerbate the recruitment difficulties faced by local businesses. Whilst the government’s decision to lift the cap on skilled workers is welcome, the lack of a viable route for low skilled workers is of particular concern with certain sectors such as the embattled retail industry and the hospitality sector likely to be hit hardest by these changes.

With not long remaining until the new proposals take effect, UK businesses have been given very little time to adapt to the new arrangements. It is important that the new system is easy to use and does not prevent local businesses from having access to overseas workers at all skills levels. The shortage occupation list in particular must keep up with and reflect the needs of an ever-changing market. We are encouraging businesses to share their views on these proposals and will continue to feedback the concerns of the West Midlands business community to decision-makers. We will also be providing briefings and events for local businesses to help them get up to speed on what this new immigration system will mean for them.

This briefing paper was created in September 2020 as part of a regional Brexit business support project, supported by the WMCA. The project includes a whole range of briefing papers on key topics, Brexit checklists, online workshops, export documentation and trade training, customs, advice, training and much more. Find out more on the Black Country Chamber's Brexit Hub here: https://www.blackcountrychamber.co.uk/campaigns-projects/brexit/regional-brexit-business-support-/