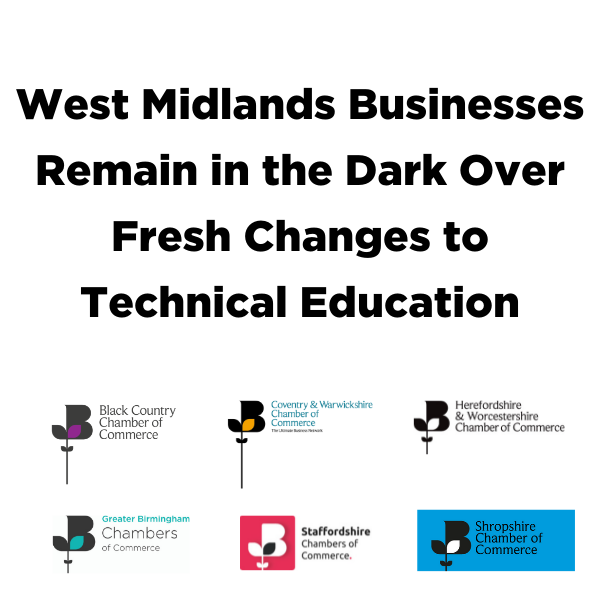 A recent survey by the British Chambers of Commerce shows that West Midlands businesses remain largely in the dark over fresh changes to technical education.

The government’s latest change to technical education, the T Level, set to be rolled out in 2020 across the West Midlands and UK. However, business knowledge of the qualification remains low.

A combined 74% of respondents had either heard nothing at all or knew the qualification by name only. The T Level is set to be rolled out in 2020 and will be offered by a range of West Midlands-based providers.

Almost 40% of respondents stated they have no plans to offer the compulsory 45-day industry placement to 16-18-year olds studying a T Level. In terms of the apprenticeship levy, just 35% of respondents said they had taken on new apprentices since its introduction.

Many businesses in the region have suggested that the apprenticeship levy simply feels like another tax with an inherent lack of flexibility.

Corin Crane, Chief Executive at the Black Country Chamber, said: “We are at critical point now. We know from our daily interactions with members that industry knowledge of the T Level is low. “Although our members largely agree with the strategic ambition of the T Level, there are fundamental questions to be asked about the capacity of SMEs in the Black Country to offer a work placement for this amount of time.”

Sharon Smith, CEO, Herefordshire & Worcestershire Chamber of Commerce, said: “T Levels will offer students a mixture of classroom learning and ‘on-the-job’ experience during an industry placement of approximately 45 days. Government needs to do more to highlight the introduction of T levels and raise business awareness of the introduction of this alternative to A levels.

“Just 2% of businesses in Herefordshire & Worcestershire know a lot of details about T Levels - it appears that government has a long way to go in terms of communicating the roll out of this new vocational alternative to ensure its success.

At present, 33% of businesses in Herefordshire & Worcestershire have no plans to offer work placements of at least 45 days.”

Sara Williams, Chief Executive of Staffordshire Chambers of Commerce said; “These results show that, once again, government has failed to effectively communicate education policy to the private sector. This persistent tinkering with the education system has left businesses in the dark to important changes in the delivery of post-16 training.

“While most, if not all, businesses understand the importance of offering good quality work experience, training placements and apprenticeships within their local communities, government must ‘try harder’ when it comes to engaging at an early stage.

Staffordshire Chambers will continue to bridge the gap between employers and the education sector."

Louise Bennett OBE, Deputy Lieutenant of the West Midlands, CEO of Coventry & Warwickshire Chamber of Commerce “The fact that companies are still unaware of changes to qualifications and training is not wholly surprising because it will take time for them to bed down and for companies to understand what is available.

“Businesses need stability – on more than one front – and when it comes to skills and training, they should know that the Chamber can help to point them in the right direction to suit their needs.”

Richard Sheehan, Chief Executive, Shropshire Chamber of Commerce “Whilst the role out of T levels is in its infancy, we have had pilots run here in Shropshire which whilst helping a little with understanding it is clear that the majority need simplicity and clarity when it comes to education. Government must learn from mistakes of the past if T levels are to be fully embraced by business and our young people are allowed to flourish under this programme.”

Paul Faulkner, Chief Executive, Greater Birmingham Chambers of Commerce said; “The results of this survey reflect what we have been hearing from the Greater Birmingham business community, particularly during our recent Growth Through People campaign; the UK’s education and skills landscape is becoming too confusing for many businesses.

“A lack of understanding around recent – and ongoing - reforms to apprenticeships and the introduction of T Levels won’t help reduce the skills gaps constraining business growth in our region.

National government must be clearer in communicating and explaining the changes to the education and skills system to businesses and make it as simple as possible for local firms to engage with the world-class training providers, colleges and universities in the West Midlands.”

The Workforce Survey 2019 was collated by the British Chambers of Commerce.

Research took place between 29 April and 15 May collected from 1,150 responses.

This evidence is used to influence key policy decisions taken by local and national government.