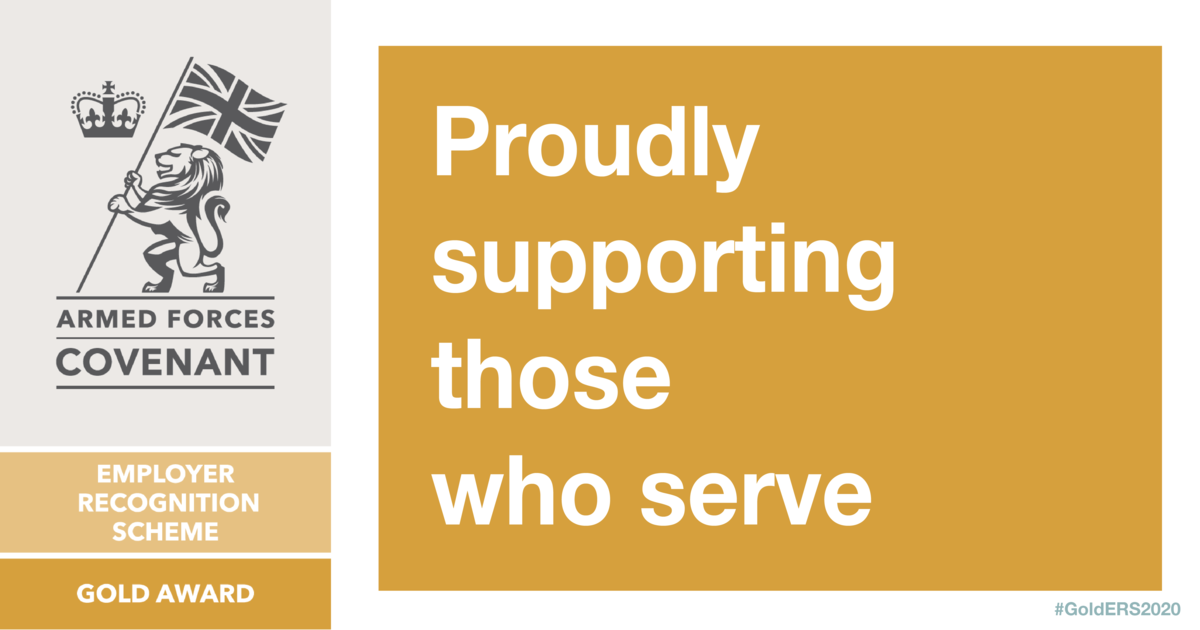 The Black Country Chamber of Commerce is extremely proud to be the first Chamber in England to have been awarded the Defence Gold Employer Recognition Scheme (ERS) Award 2020.

The three-tier scheme of bronze, silver and gold awards encourages employers to support defence and the wider armed forces community by aligning their company values and providing a working environment that openly advocates support for employees from the service community.

The awards enable the Ministry of Defence to publicly thank and honour organisations for their support.

127 new employers have this year been announced as recipients of the Gold ERS award which includes the Black Country Chamber of Commerce, and two of our members Black Country Housing Group and City of Wolverhampton College.

2020 marks the seventh year of the awards scheme and this year 47% of winners are either Micro organisations or SMEs and 38% are public organisations.

Corin Crane, Chief Executive for Black Country Chamber of Commerce said; “The Defence Employer Recognition Awards represent the value of our UK Armed Forces and the many benefits they bring to employers and business. As an organisation we are committed to upholding our covenant pledge, receiving gold status is testimony to the hard work and endeavours of our team and we congratulate our fellow award winners for the recognition and value they place on our Armed Forces and those in the wider defence community.”

Black Country Chamber of Commerce is now extending its support for the Armed Forces by leading on a nationwide project known as Chamber Military Network which with the full backing of the British Chambers of Commerce, seeks to support Chambers’ of Commerce throughout England with their covenant pledges and improve knowledge and understanding within organisations of the business benefits of recruiting from the Armed Forces Community.

Sponsored by the Forces in Mind Trust and working with Defence Relationship Management (DRM), the Black Country Chamber of Commerce team directly engage with British Chambers, their business members and the wider Armed Forces Community to encourage a proactive approach to carrying out covenant pledge commitments.

Speaking on behalf of the Ministry of Defence, Johnny Mercer Minister for Defence People and Veterans said; “ The breadth and diversity of the winners this year show business support for the Armed forces continues to grow no matter the sector, company size or location. I am grateful for the positive attitude and flexible policies these organisations have adopted towards the defence community, which is testament to the fantastic contribution our serving personnel, veterans and their families can make to any organisation.”

Sarah Walker, Project Manager and Armed Forces Champion for Black Country Chamber of Commerce said; “Gold ERS status is a huge achievement which publicly recognises our support for the Armed Forces Community within the Black Country and through our nationwide project the Chamber Military Network (CMN).

"As a Chamber, we are the lead on the CMN project and the award winning ‘Supporting the Unsung Hero’ business start-up programme, which is designed specifically for spouses of serving Armed Forces personnel, Veterans and Reservists. We remain committed to ensuring the profile of our military community is raised at the highest levels.”