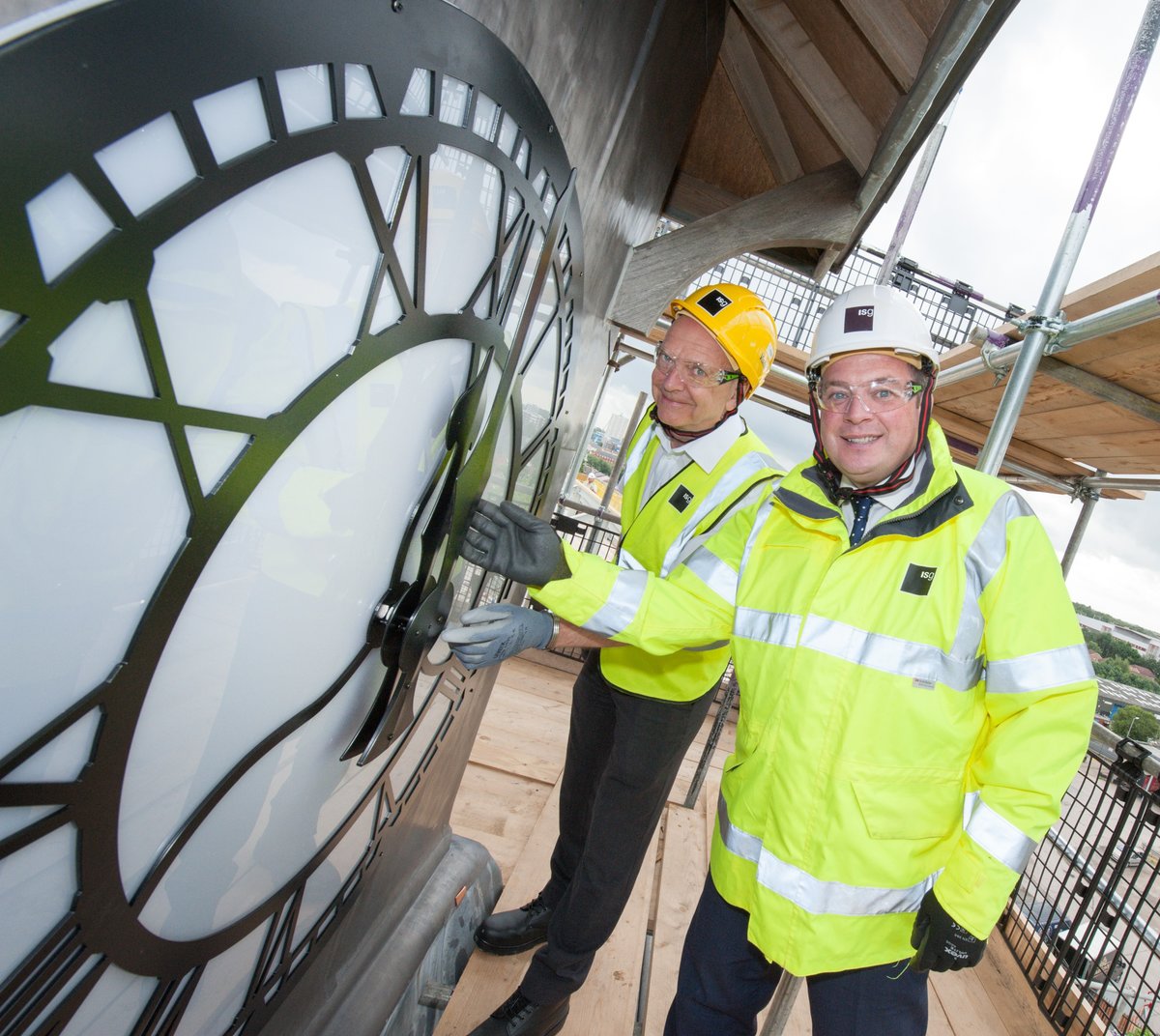 Springfield Campus clocks up another milestone in £100 million project

The University of Wolverhampton’s £100 million investment in a new construction excellence campus has reached another milestone – and the clock is literally ticking down to the opening of its new School of Architecture and Built Environment.

The restored iconic clock tower, which sits at the heart of the new building, has been revealed at an official ceremony to mark the installation of four new clock faces as part of the redevelopment project.

Midlands’ company, Clock Tower People Ltd, based in Worcestershire, designed and created the new bespoke clock which is an exact replica of the original which presided over the former Springfield Brewery buildings. The clock tower was built in 1922 and survived a fire which destroyed most of the building in 2004.

Home to the West Midlands University Technical College, the University’s School of Architecture and Built Environment, and the Elite Centre for Manufacturing Skills, the regeneration of the former Springfield Brewery is central to the University’s vision of enhancing the student experience and supporting business growth.

Professor Geoff Layer, Vice-Chancellor at the University of Wolverhampton, said: “We’re absolutely delighted to have reached this milestone in the build project.

“The iconic clock tower is part of Wolverhampton’s rich and diverse landscape and its restoration is symbolic of the regeneration of this brownfield site in the heart of the Black Country.

“Since its purchase in 2014, the derelict site has been rejuvenated into a centre of excellence for construction and the built environment, delivering an unbeatable skills pathway for construction education and training from the age of 14 to senior professionals and acting as a catalyst for economic and social regeneration.”

Adrian Sharp, Clock Tower People Ltd, said: “We are proud to be working with ISG to manufacture and install four new clock faces for the New School of Architecture and Built Environment in Wolverhampton. The clock faces are based on the original design, but with modern GPS controlled stainless steel clock mechanisms and LED lighting, which we hope will provide many years of service for this prestigious project.”

Wayne Flannery, regional director at ISG, the construction services company delivering the new campus, said: “This marks a hugely symbolic moment for the university and the wider redevelopment of this iconic Wolverhampton site. For many in the community, time has stood still on this site for over 30 years, but now the reinstatement of our four-face clock signifies transformation and a bright future.

“The clock itself beautifully encapsulates the essence of this landmark project – protecting and preserving the old, but at the same time introducing sympathetic elements that bring us right into the 21st century and fit for the future. This is a true legacy project from every conceivable angle, and we are immensely proud that our endeavours will have a profound impact on the local community and our wider industry for many years to come.”

The new School of Architecture and Built Environment, which has been designed by Associated Architects, is due to open in September 2020.

Picture caption: Professor Geoff Layer, Vice-Chancellor at the University, left and Wayne Flannery, Regional Director at ISG on the right. Anyone looking to study in the Faculty of Science and Engineering should register for the next Open Day on Saturday 17th August 2019.