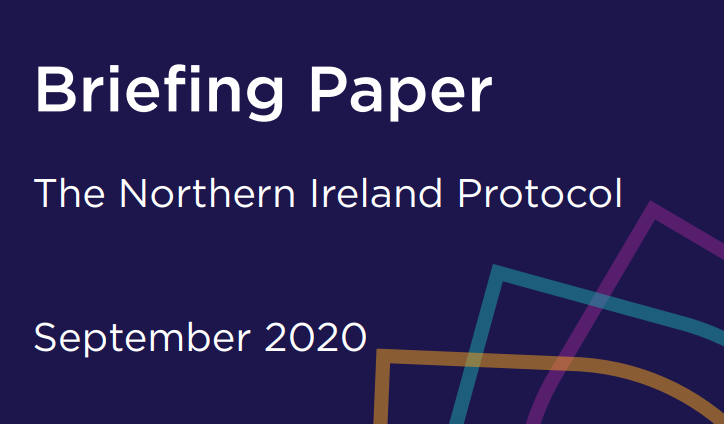 The Northern Ireland Protocol is a key provision within the Withdrawal Agreement negotiated between the UK and the EU. Find out how it may affect your business in this blog.

What is the UK’s approach to the Northern Ireland Protocol?

The Northern Ireland Protocol is a key provision within the Withdrawal Agreement negotiated between the United Kingdom and the European Union. The purpose of the protocol is to avoid a hard border on the island of Ireland which would lead to new customs infrastructure and customs checks being introduced at the border between the two countries.

Under the terms of the Withdrawal Agreement, Northern Ireland will stay aligned with EU rules concerning manufactured goods and agricultural products but remain a part of the customs territory of the United Kingdom. This means that it will leave the EU Customs Union along with the rest of the UK at the end of the transition period.

With the UK leaving the EU customs territory from 2021, this will require checks on goods leaving the UK for the EU market (and vice versa) and the collection of tariffs. However, as both sides have committed to ensuring that there will be no customs checks or controls at the border between Northern Ireland and the Republic of Ireland, this means that any checks will need to take place on goods moving between Great Britain and Northern Ireland instead.

The UK government has published its approach to implementing the Northern Ireland protocol and has said that businesses moving goods from Northern Ireland to the rest of the UK should continue to operate as they do now with no additional tariffs, customs checks or restrictions put in place. However, there will be checks on agri-food movements which require prenotification and will need to enter Northern Ireland from Great Britain via a Border Inspection Post or Designated Point of Entry.

By remaining in the UK customs territory, this will enable Northern Irish businesses to benefit from any free trade agreements the UK reaches with other countries. Goods arriving in Northern Ireland from countries outside of the EU will be subject to the UK tariff rate unless they are at risk of being moved to the EU. Businesses can find out more information about the new UK tariffs that will apply from 2021 here.

The UK government will be able to waive or reimburse tariffs on goods that remain in Northern Ireland after being imported from the rest of the UK or non-EU countries.

It is important that businesses are aware that there is a consent mechanism within the protocol which allows the Northern Ireland Assembly to vote every four years on whether these arrangements should continue to apply.

If the elected institutions in Northern Ireland withhold their consent then these arrangements will cease to apply two years later and this may result in further changes when transporting goods between Northern Ireland from Great Britain.

How will the UK’s approach to the Northern Ireland Protocol affect my business?

These changes will impact businesses that deal with customers or suppliers based in Northern Ireland as the UK customs authority will be required to apply EU customs rules at its ports to goods entering Northern Ireland.

Traders based in Northern Ireland will need to submit customs declarations and safety and security information when importing goods from businesses based in Great Britain. The government is aiming to avoid as many physical checks and controls at Northern Ireland’s ports as much as possible and has said that the additional documentation will be submitted using electronic processes which will be streamlined and simplified as much as they possibly can be.

To help businesses in Northern Ireland with these new administrative processes, the UK government has said that it will establish a new Trader Support Service (TSS). Traders will be able to register for this free to use service which will complete import declarations and safety and security details on their behalf using the information that they have provided.

Businesses sending goods to Northern Ireland should be aware that their customers will have to pay EU import tariffs on their goods (unless a UK -EU tariff free trade agreement is ratified) if they are deemed to be at risk of entering the EU. We are still awaiting clarification on the criteria for goods defined as ‘at risk’ of being moved into the EU and therefore subject to tariff payments. However, there will be exemptions or a potential reimbursement for businesses that can prove their goods will remain within Northern Ireland.

Businesses placing manufactured goods on the market in Northern Ireland will need to continue to produce goods to EU standards and hold the relevant approvals as they do now for ‘harmonised’ goods covered under the Northern Ireland Protocol. Northern Ireland businesses will not face new restrictions and will be able to place goods on the market throughout the rest of the United Kingdom without the need for additional approvals as the UK will accept the results of assessments carried out by EU conformity assessment bodies.

What are the Chambers of Commerce’s views on the UK’s approach to the Northern Ireland Protocol?

We are committed to ensuring that businesses are kept informed of key announcements made by the government in the run up to the end of the transition period. With only a few months remaining, we will also be running a number of webinars over the coming months, featuring guest experts, covering the key issues that matter to business. We have also produced a number of briefings outlining important policy announcements such as the future UK immigration system and the UK Global Tariff. Businesses can access further support through our International services which offers advice on all aspects of international trade and a range of accredited training courses to help businesses with import procedures and export documentation.

This briefing paper was created in September 2020 as part of a regional Brexit business support project, supported by the WMCA. The project includes a whole range of briefing papers on key topics, Brexit checklists, online workshops, export documentation and trade training, customs, advice, training and much more. Find out more on the Black Country Chamber's Brexit Hub here: https://www.blackcountrychamber.co.uk/campaigns-projects/brexit/regional-brexit-business-support-/