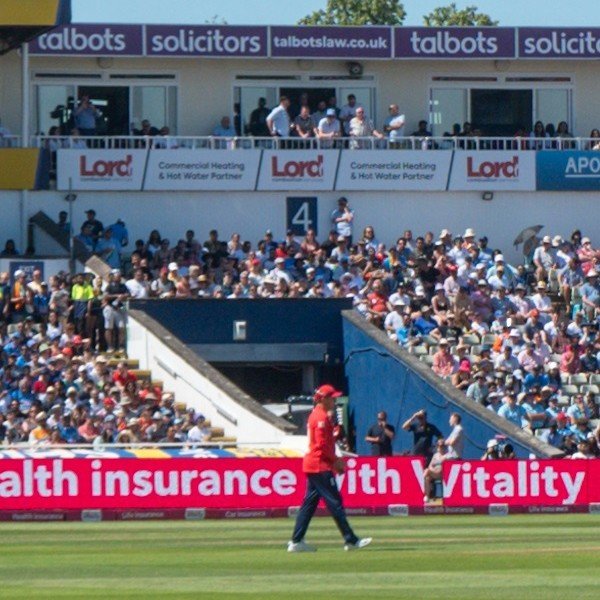 The Lord Combustion Services branding was on display throughout the dramatic Test match victory over India at Edgbaston in Birmingham as well as the second Vitality IT20 game against the same international opposition.

The Lord logo, present on the stand, was on show to an international TV audience for the Test, which saw England complete a record chase of 378 to beat India in rapid time on the final morning of the fifth Test at the start of July.

As the Edgbaston website report put it: “The win ensures a series that was postponed last summer is drawn 2-2 but, more importantly, it is the greatest validation to date of England’s ultra-positive approach to Test cricket.”

The following week, the Lord messaging was on display as England were beaten by 49 runs in the second Vitality IT20 in front of a sold out Edgbaston as India clinched the three-match series with a game to spare.

Lord have built a strong partnership with Warwickshire County Cricket Club and Edgbaston. Edgbaston stadium, one of the leading venues in international cricket, benefits from an efficient and more effective hot water system installed by the team at Lord last year.

The Test venue turned to Lord as its official commercial heating and hot water partner when it needed to introduce a new water system for all areas of the stadium’s £32 million South Stand, from the player changing rooms to the kitchens and corporate hospitality rooms.

Lord won a sustainability award last for their environmental impact, including the Edgbaston project. Lord, who recently marked their 40th anniversary, have signed up to have their logo placed on the sleeve of the club’s new Royal London Cup shirt for the 2022 and 2023 seasons.

The Lord branding appears on the latest eco-friendly designs by official kit supplier PlayerLayer, which will be worn by the Bears during the 50-over competition taking place in August.

Managing Director Stuart Smith said the Lord team were proud to see the Lord branding visible to TV audiences around the world. Stuart said: “We were delighted to see the Lord branding on show to people around the world as part of our long term partnership with Warwickshire County Cricket Club. We value our strong link with the team at Edgbaston as they go from strength to strength.”

Having opened for business in 1982, Lord Combustion Services has grown from being a mechanical contractor specialising in service and commissioning of gas and oil-fired equipment to provide all aspects of mechanical and electrical building services.

Based in Dudley Road East, Oldbury, the company made the West Midlands Net Zero Business Pledge to reduce their environmental impact during a visit by West Midlands Mayor Andy Street to mark their 40th anniversary in April.